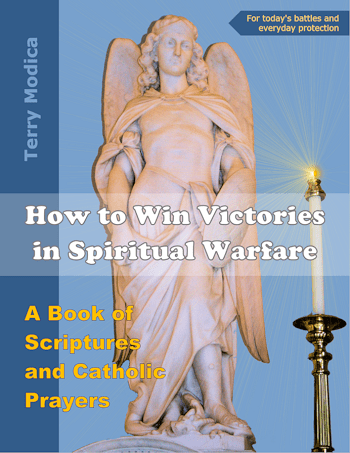 This printable handbook includes the Prayer for the Presence of Christ, Prayer for the Power of the Holy Spirit, Prayer to Saint Michael the Archangel, Prayer to Wear the Armor of God, Saint Patrick’s Breastplate, Prayer to Conquer Evil, Prayer to Break Curses, Prayer for Release from Ancestral Curses,  Prayer of Authority to Conquer Demons, Consecration to Mary Defeater of Satan, Consecrate Your Marriage to Mary Ark of the Covenant, Zechariah’s Canticle as a Victory Prayer, and Praying the “Our Father” for Victory Over Evil.

Plus more than 200 scriptures to learn from!

The scriptures are excerpted from my book, Overcoming the Power of the Occult, which was published in 1989. Most of these prayers can be found on and downloaded from the Prayer Room on our website @ gnm.org/prayers/#victory.

Learn from over 200 scriptures covering:

Terry Modica is CEO and Executive Director of Good News Ministries of Tampa Bay, Inc., which she co-founded with her husband Ralph in 1995. On the front lines of the battlefield for the salvation of souls, they have had to learn and successfully use the spiritual warfare scriptures and prayers that are now being shared in this handbook.

Order it from Catholic Digital Resources. Only $5

My Soul Shall Be Healed
30 Days to the Father's Heart
9-Day Consecration to St. Joseph
FORGIVEN
A Meditation on the Passion of Christ
RADICAL LOVE:
Reflections for Couples
Victor: The Novel
How to Win Victories in Spiritual Warfare
Dark Secret of the Ouija
Overcoming the Power of the Occult
Daily Prayers with the Saints
The Trail of Roses:
A Lenten Journey